These emulators can help you run iOS apps on your Android smartphone very smoothly. I have also shared these iOS Emulators for PC. So, without any further ado, let’s get started.

These are the iPhone emulators available for Android phones and tablets. Go through the list one by one; let me know if you have any questions in the comments.

iEMU is considered one of the best iOS emulators for Android smartphones for some excellent reasons. It is an open-source Android program designed by CiderTeam to help Android users run iOS apps on their smartphones without making any harmful changes. Due to its open-source nature, the iEMU emulator is completely free to use. Also, users can trust the app as the code is openly available for testing and modification purposes.

Another great benefit of being an open-source program is that developers across the globe can test the code and suggest modifications to improve functionality and fix bugs in the emulator. It is one of the primary reasons the iEMU emulator gets very frequent updates from developers.

The latest released version of the iEMU emulator is V3.0.12, which was released on 10th December 2020. The thing that makes the iEMU emulator a better choice for iOS emulators than the others because it does not require root privilege.

To use this app, you only need an Android device with Android OS 3.0 or above. The iOS emulator can be easily downloaded from various online platforms. For your ease, I will mention a direct download link below.

However, the iEMU emulator does possess some drawbacks. The first one is that it requires a heavy system resource, and therefore, if you have an older Android device, you may face some stuttering and lags while using this iOS emulator.

Also, it has not been designed to run heavy games. However, you can use this iOS emulator to enjoy the iOS feel and run some normal apps only available for the iOS platform.

Cider Apk, formerly known as Cycada, is one of the best iOS emulators for Android available on the internet. This iPhone emulator has an exciting origin story. It was developed by six students of the CSE department of Columbia University as a university project. For the fun purpose, they named it after a beverage that gets prepared using fermented apples. Even though they started this project to make fun of iOS, they soon realized that it has some potential, and they started researching iOS emulation and ARM hardware.

Later, after making a stable release, they officially launched the Cider Apk. There are a lot of good things about the Cider iOS emulator. The first one is that it is entirely free, making it readily available to many users.

It uses a compile-time adaptation technology that helps run the unmodified code with minor changes. Therefore, this app can run iOS apps on Android very smoothly. In addition, the size of the app is just around 8 MB, making it one of the lightest iOS emulators for Android out there.

It is also an ad-free iOS emulator that means you don’t have to deal with any advertisements. But the only limitation of the Cider emulator is that it is not compatible with all Android devices.

Therefore, you have to check whether your smartphone is compatible with it or not. Also, due to some Google policies, the app is not available on Google Play Store. But anyway, you can download it from any third-party website very easily.

RunThatApp is another one on our list of the best iOS emulators for Android users. It is a completely cloud-based emulator. Since it is a web-based tool, you don’t need to install any app on your smartphone. Instead, you need a web browser and a working internet connection. The best thing about the RunThatApp iOS emulator is that it is capable of running any iOS app. It doesn’t matter how heavy it is in size; RunThatApp can smoothly run anything. So even you can use this tool to play heavy iOS games on your Android smartphone.

RunThatApp platform is primarily designed for iOS app testers and developers to build and debug native iOS apps on other platforms. But its Actual App-Casting technology enables many excellent features like shared user collaboration, video game speed, app management, and others that make it a perfect choice for users with all needs.

However, there are some shortcomings associated with the RunThatApp iOS emulator. The first one is that it is not freeware, and users have to pay to use it.

To use this iOS emulator, users have to pay $0.05 per minute, a major deal-breaker for users looking for free iOS emulators for Android. Another thing is that it requires a high-speed internet connection; otherwise, you might face some stuttering and delayed response.

Appetize.io is another cloud-based iOS emulator on our list. Like the RunThatApp iPhone emulator, you don’t need to install Appetize.io on your Android smartphone. Instead, it will save some space and resources on your smartphone and make it easier to use the iOS emulator whenever you need it. 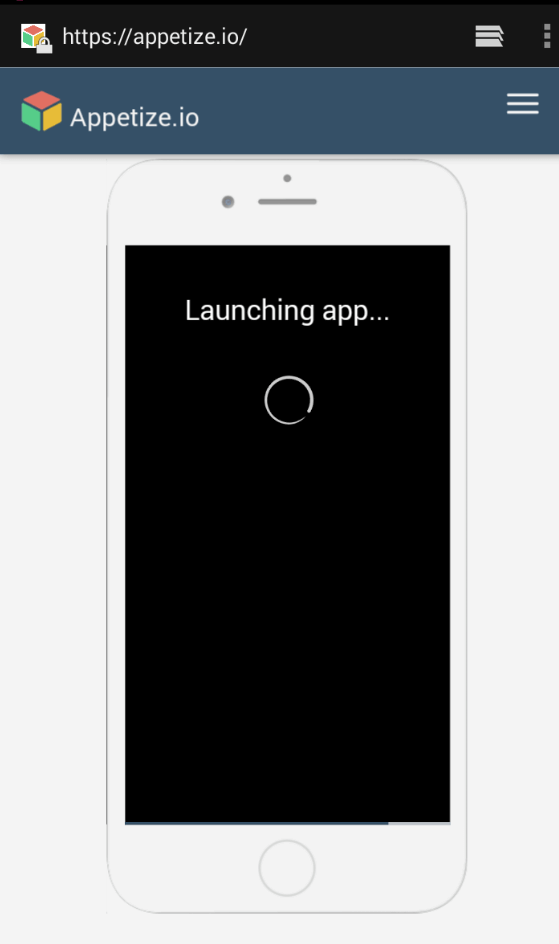 Appetize.io supports different iOS versions, and users can even select the specific iOS device with desired iOS version. It supports iPhone 4S to up to iPhone 11 Pro Max and many iPad models. In addition, the iOS versions Appetize.io offers range from iOS 8 up to iOS 14, making it available for all types of iOS apps.

It is a freemium tool that means free users only get limited access to its features. The free trial only allows users to use 100 minutes of access to its emulator per month. Users like me, who use these emulators to test apps only, seem pretty much sufficient.

But if you want an iOS emulator to play games or something else, you will be needed to opt for a premium membership that costs $40/month, which can be a deal-breaker. Also, Appetize.io doesn’t offer Apple’s App Store and other Apple products like iMessage, iTunes, etc.

Therefore, you must manually upload the compressed .app bundle in a .tar.gz or .zip format. If you don’t want to get into much technicality, I don’t suggest you chose Appetize.io.

An iPhone emulator creates an iOS environment on the hardware and software level to install and run iOS apps on Android. Unfortunately, a big majority of users don’t actually want an iOS emulator for their Android phone. They need something that would mimic the feel of using iOS on their smartphone. An emulator is entirely a different thing than what they need. Since most users don’t want to run iOS apps on their smartphone and want to make their Android smartphone’s UI look iOS, an iOS themed launcher can be the best option.

iOS Launcher 14 is one such iOS themed launcher that can change your device’s regular UI to iOS 14. iOS Launcher 14 is very easy to install. It can be downloaded right from the Google Play Store, and it gets installed on your device in no time. Setting it up is not much difficult, and the best thing is that you can customize the launcher according to taste and needs.

However, as I already told you, it is not an iOS launcher. Due to that, it does have some limitations. The first one is that it cannot be used to run iOS apps on your smartphone. Even though it changes your Android smartphone’s UI to iOS, that will not function as an actual iOS. Your smartphone’s UI will look like an iOS, and that’s it.

So, there you have it – the 5 best iOS emulators for Android devices. This list contains different types of iPhone emulators. Emulators like the iEMU or Cider Apk can be installed on your smartphone to give you access to install and use iOS apps on your Android smartphones.

But such Apple emulators come with some limitations, like they are only compatible with a few devices or support limited iOS apps. On the other hand, we have cloud-based iOS emulators like RunThatApp and Appetize.io that offer you immense functionality and support many iOS apps.

But they are not free, and you will have to opt for their premium services. And at the end, we have iOS Launcher 14 designed for people who are not looking for iOS functionality but want to get their UI to be like iOS. So with that said, here I am wrapping up the article.

I mentioned all the different iOS emulators for Android in this list, and I hope you find the one that fulfills all your needs. If you have any questions, feel free to shoot them in the comment section below. Our team will try to answer all your queries ASAP.